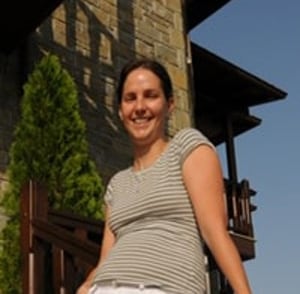 Niki is one of those great people who are hard to find but when you do you are fortunate. Years earlier in a first exploration of Meteora we were set to spend two nights looking at the monasteries & checking out local hotels. I remember that the monasteries were so impressive that our time over ran significantly & we had forgotten to book any hotel for the night. We had a list with us but were still discussing which one to try on our way down when we noticed a sign on the road & nice guesthouse set in just behind. We just stopped on impulse & were surprised to be greeted not by a Greek but a Danish girl who welcomed us in & showed us around. Immaculately kept, the boutique guesthouse turned out to be the perfect base for the area & Niki’s hospitality then & ever since has kept us coming back at every opportunity over the subsequent years. We have always noticed that she creates an intimate, warm and family friendly atmosphere that seems to rub off on her guests with many returning for a second visit to explore more in the area such as the great local hiking trails of this dramatic landscape.

On our last visit we took the opportunity to ask Niki a few things & in the process got to know her a little better ourselves. For instance we had no idea how she had come to find herself in Meteora from the Netherlands? She tells us with a smile that she caught the travel bug & love for Greece around 2003 after working as a tour leader for a travel company. Deciding to move to Athens initially for several years she also fell in love with her husband Dimitris who luck would have it was from the town of Kalambaka nestling at the foot of the rock pinnacles of Meteora.

Niki tells us that after much hard work they finally opened their boutique hotel there at Christmas 2009 & since then & with three young children appearing on the scene the family culture & the Greek peoples love of children has also cemented her roots here. Bringing the Dutch love of the outdoors also she tells us that the opportunities of enjoying the nature of the area & of Greece with her family are wonderful. And for future plans? ‘Dimitris has a traditional taverna in the center of the town now & tourism seems to be growing year on year here so we are focused on that’ so we dont have plans on changing anything at the moment’. We tell her thats good news for us! & we look forward to our next visit.