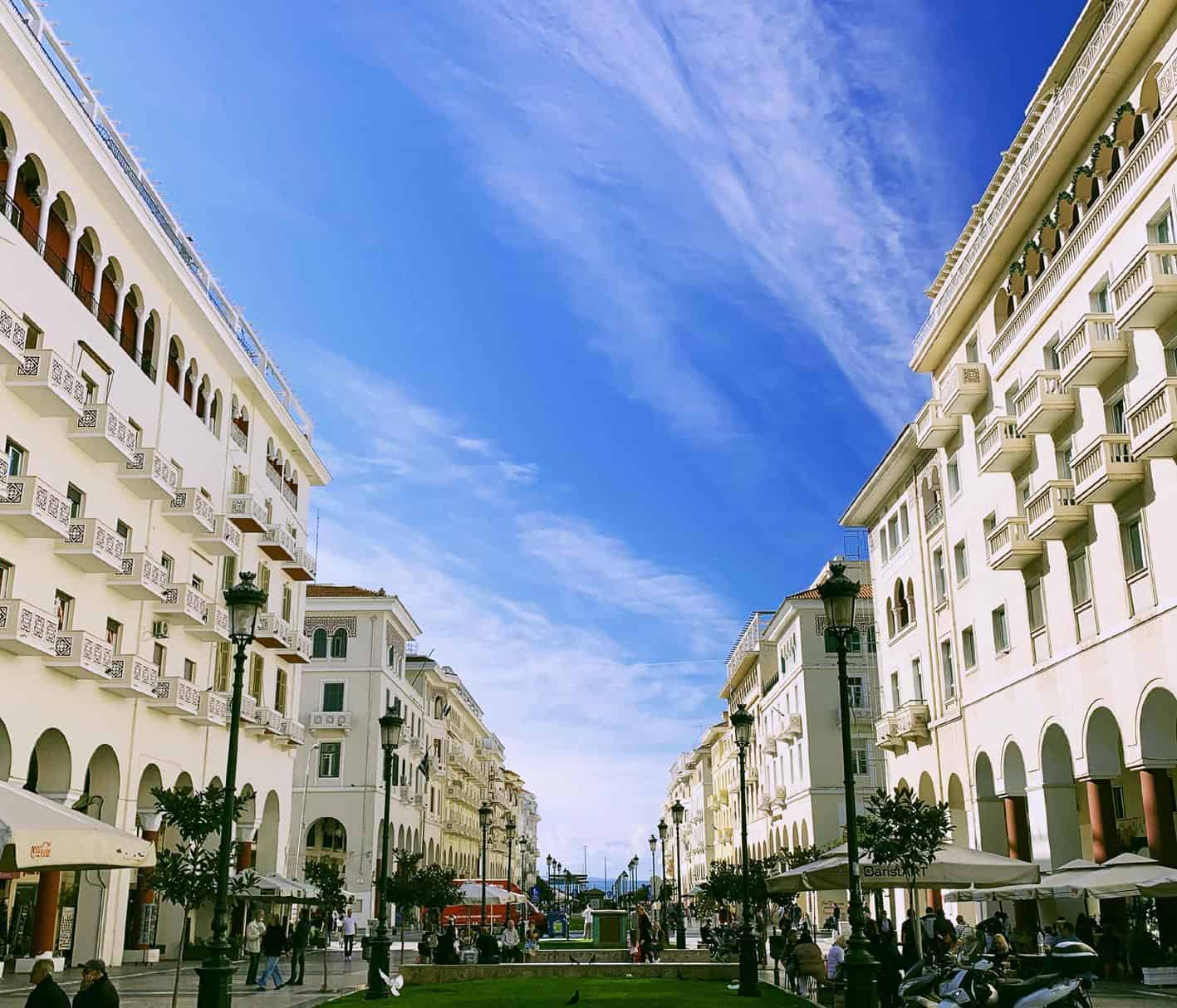 Thessaloniki has a very different feel to the Capital of Greece. During our visit, it was obvious that food was central to the life of the city with the main areas packed with Cafes, Restaurants & Bakery’s selling all sorts of sweet & savory varieties of the regional specialty, ‘borgatsa‘. Some of the highlights of Thessaloniki sightseeing are covered below.

The White Tower, originally a Byzantine fortification, has been adapted as the symbol of this city. After the fall of the city to the Ottomans in 1430 it became a notorious prison & was the scene of mass executions. whitewashed after its recovery by the Greeks it is now a museum & landmark.

Dedicated to the Greek Philosopher Aristotle & designed by the French architect Ernest Hébrard around the 1920s. Beautifully restored architecture with some nice hotels like the Electra Palace. The square is a great place to pick up a classic sweet or savory pie ‘borgatsa’, & Jam-packed with local cafes & eateries. Our favorate street in the City.

The Rotunda is a Roman Temple built in 306AD. The Byzantine emperor Constantine I then converted it into a church, and later in Ottoman times, it became a Mosque with the addition of its still-standing minaret.

Now it stands in the middle of this noisy city & is a great place to visit with amazing mosaic gold & colored frescos covering much of its large interior.

Seeing this impressive building, decoration & scale, it feels very much like we are looking at the forerunner & model for the classic Christian cathedrals that sprung up centuries later.

The museum reminded me very much of the one in Ancient Olympia in terms of Architecture & is laid out in a well organized & spacious way on two levels. It’s not large but any visit will still need at least an hour. Highlights were the many ancient gravestones & in particular the one pictured telling the story of a father who had buried his son. The sculptor rendering the image with incredible skill. Much of the famed Macedonian Gold is on display as well as many unique pieces of armor & artifacts from the Macedonian period in Greece from 7000 BC.

The Umbrellas – By George Zongolopoulos

The Umbrellas sculpture is just along side the iconic White Tower & at the start of a long promenade. The sculptor was born in Athens & first exhibited the work in 1995. It has since found a permanent home on the sea front

The Arch of Galerius was commisioned along with the Rotunda by the Roman Emporor Galarius in the 4th-century. Central in the city the Arch depicts victory over the Persians in 298 AD and was connected by an ancient road to the Rotunda.

Statue of Alexander the Great. Born in 356BC & the son of King Philip of Macedonia. Alexander remains an Icon of Northern Greece. Educated by the Greek Philosopher Aristotle, after inheriting the throne he went on to expand his kingdom to the reaches of Egypt & into India as one of the largest empires in the world.

The Bey Hamam, also known as the “Baths of Paradise”, is one of the few remaining Ottoman bathhouses in Greece & was in use up to 1968. Restored after an earthquake, it is used for events & is located centrally at the main Egnatia Avenue.